The Rite of Spring is a ballet and orchestral concert by the Russian composer Igor Stravinsky. Last weekend, I saw the production at Stadsteatern in Stockholm, Sweden.

I first heard about this performance when a colleague sent me a short film from the rehearsals of the first act. At that time I was still in chemo treatment and not in the best shape. The film clip was captivating, and I decided that I wanted to see the show when I got better.


The first act is a newly composed duet between an ABB industrial robot and Henrik “Benke” Rydman, a renowned Swedish choreograph and dancer. The robot is normally used in the industry, mainly for welding and material handling, but in this performance it turns out to be an excellent dance partner. I found it a very cool and fascinating way of showcasing human and robot collaboration, and it felt almost like the robot was a person.

For me, who has worked with robots and technology all my life, it was also interesting to see how the latest software technology had been utilized, to enable the dancer to safely coexist in the same space as the robot.


The Rite of Spring

The Rite of Spring is considered one of the greatest works of the 20th century, a ballet so revolutionary it is said to have caused a riot at its premiere in Paris 1913. 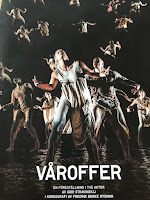 The production in Stockholm is a street dance version of the Rite of Spring (Våroffer in Swedish) with twenty dancers and a lot of water! No riots have been reported yet, but it is a fantastic show. Very powerful and moving performance, about the circle of life. No surprise it has been sold out since the beginning in August.

Thank you Joakim for booking tickets, and thank you Marie-Louise and Hans for a lovely evening! I am very fortunate to have you as friends.

Your comments are always welcome!